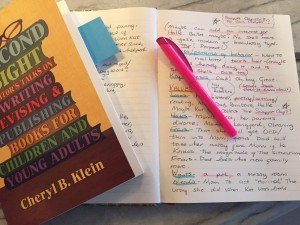 In 2011, frustrated that my chick-lit novel had failed to capture the interest of an agent (or my own mother, which says a lot), I decided to shelve it and try another genre. I’ve always had an obsessive love affair with Louise Fitzhugh’s 1964 classic, Harriet the Spy, so middle grade was the natural choice. I got started right away, and by the end of the year I had a messy first draft.

I revised the manuscript a bunch of times, gave the book a zippy title, and started querying agents. Like most newbie queriers (or semi-newbies; don’t forget my failed chick-lit novel!), I received a truckload of rejections. But one agent – a well respected, hard-working pro – offered representation on the condition of a revision to his specifications. Thinking this was my golden ticket to publication, I jumped at the chance. Unfortunately, Pro Agent couldn’t sell my manuscript and didn’t think it was wise to keep trying. We parted ways.

If I were less stubborn, I would have called it quits. But I believed in my novel, and I hoped others would too. So I took a long, hard look at the manuscript and completely reworked it. I revamped the plot, added new characters, and changed the title. I also hired a crackerjack freelance editor for a full-scale manuscript evaluation. Then I started querying my new-and-improved manuscript, KAT GREENE COMES CLEAN.

To my amazement, I received requests for fulls right away – including one from my dream agent, the amazing Kathleen Rushall of Marsal Lyon. When she offered representation, my squeals of delight could be heard all the way to Siberia and back. I couldn’t believe it: My first-choice agent had given me a second chance.

With Kathleen’s help, I revised the novel yet again and found a happy home for it with editor Julie Bliven at Charlesbridge. I received my first editorial letter from Julie last week and, with Cheryl Klein’s excellent revision primer, Second Sight: An Editor’s Talks on Writing, Revising & Publishing Books for Children and Young Adults, am working on my revisions now.

It’s been a long road, with detours and speed bumps along the way. But each bump and pit stop has brought me closer to my long-yearned-for dream: to be a published author. I hope you will join me on this incredible journey. It’s nice to have good friends along for the ride.