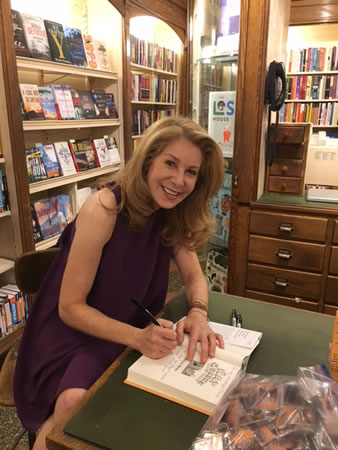 Meet Melissa
Melissa Roske is a writer of contemporary middle-grade fiction. Before spending her days with imaginary people, she interviewed real ones as a journalist in Europe. In London she landed a job as an advice columnist for Just Seventeen magazine, where she answered hundreds of letters from readers each week. Upon returning to her native New York, Melissa contributed to several books and magazines, selected jokes for Reader’s Digest (just the funny ones), and received certification as a life coach from NYU. In addition to her debut novel Kat Greene Comes Clean (Charlesbridge, 2017), Melissa’s short story “Grandma Merle’s Last Wish” appears in the Jewish middle-grade anthology, Coming of Age: 13 B’Nai Mitzvah Stories (Albert Whitman & Company). An active blogger for the popular MG website, From the Mixed-Up Files of Middle-grade Authors, Melissa lives in Manhattan with her husband, daughter, and the occasional dust bunny.

I grew up in New York City and went to a school like Kat’s in my debut novel, KAT GREENE COMES CLEAN. It was a progressive school, which means…

We called our teachers by their first names. The principal, too.

We didn’t have homework, and we didn’t get grades. We did receive feedback from our teachers, though – but it was usually cheery and upbeat (“Nice job, Melissa! Keep up the good work!”).

Instead of P.E. we had Rhythms. This involved prancing around the gym barefoot, accompanied by live piano music. The pianist was at least 100 years old and kept falling asleep at the piano. Looking back, she was probably my age. I’m kidding. Sort of.

As late as third grade, we were required to take naps. Naptime was known as “Rest,” and it took place on gym mats in the Rhythms Room. The mats were blue and smelled like gym socks. Smelly gym socks.

Our carpentry teacher let us make whatever we wanted, as long as we promised not to lose a finger. I made a lopsided bookshelf, a rickety table, and a pair of faux Dr. Scholl’s Exercise Sandals. I couldn’t walk in the shoes to save my life, but that didn’t stop me from wearing them.

As the smallest kid in the class, I got typecast as one of Santa’s elves in the holiday pageant. My friend Paul C. was an elf too. He grew out of it, though. He’s 6’2” and towers over everyone. I am still an elf. (I’m 5’1”.)

1. My favorite book is Harriet the Spy. I’ve read it more times than I am old. You do the math.

2. I’ve never been able to keep a goldfish alive. Ever.

6. I won’t eat cottage cheese, even if you pay me.

7. My most overused phrase is: “How is that possible?”

8. I wrote a novel called Behind the Lily Pond when I was 10 years old. Best line: “Anna didn’t have a mother. Well, she did… before she died.”

10. Sometimes I forget I’m a grownup.