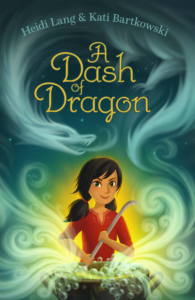 The Proust Questionnaire, popularized by the  French 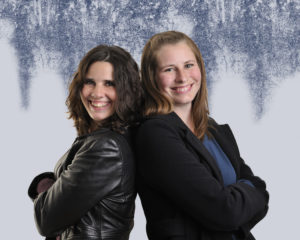 essayist and novelist Marcel Proust, is said to reveal a person’s true nature through a series of probing (i.e., nosy) questions. In the hot seat today: sisterly duo Heidi Lang (right) and Kati Bartkowski (left), authors of the MG debut, A DASH OF DRAGON (Aladdin, July 11).

What is your idea of perfect happiness?

HEIDI: Camping somewhere beautiful with my favorite people and my dogs, with plenty of food, a couple of good books, and lots of trails for hiking.

What is your greatest fear?

KATI: Spiders. But as a kid, buttons were a close second.

HEIDI: Haha – I remember the button fear! Kati was convinced that buttons could bite. And she says “as a kid,” but to this day she avoids buttons wherever possible.

What is the trait you most deplore in yourself?

KATI: Laziness, or rather my lack of energy when it comes to doing some of the stuff I’m supposed to be doing.

HEIDI: I deplore that trait in Kati, too.

KATI: Maybe you should just answer the questions, eh?

HEIDI: Okay, okay. I deplore my tendency to be judgmental.

What is the trait you most deplore in others?

KATI: A lack of loyalty to people who love and care for them.

HEIDI: A lack of compassion.

Which living person do you most admire?

KATI: I admire a lot of people, but I’m going to go with my parents.

HEIDI: You had to go with the sappy answer, didn’t you?

KATI: What’s your answer, then?

KATI: That’s what I thought.

What is your greatest extravagance?

HEIDI: Fancy coffee drinks once or twice a week. And by “week” I mean “day.” But I’m trying to cut back.

What is your current state of mind?

KATI: Exhausted. We just got done with a round of edits for book two.

What do you consider the most overrated virtue?

KATI: One of your previous interviewees said charisma, and I would have to agree with them.

On what occasion do you lie?

HEIDI: When I’m being a rug.

KATI: Please tell me you did not just use that joke.

HEIDI: I did not just use that joke. See? That’s me lying…like a rug. 🙂

KATI: You see what I have to work with?

MELISSA: Um, yeah. I kind of do. But you guys are so lucky. You’re sisters who get to write together! What’s better than that? (No snark, girls. We’re having a moment here.)

Which words or phrases do you most overuse?

KATI: ‘Actually’ and ‘You know what I mean?’

HEIDI: ‘Slightly,’ which I’ve cleverly replaced with ‘a little.’ Also, ‘just’ and ‘impossibly.’

Besides writing, which talent would you most like to have?

KATI: I’m pretty good at drawing, but I would like to be better and someday have a career in it.

HEIDI: I would love to be a good singer. Pretty sure that ship has sailed, though.

KATI: I’m not saying a word.

What do you consider your greatest achievement?

If you were to die and come back as a person or a thing, what would it be?

KATI: I can’t picture life without art and books, so I’d probably want to be a person.

HEIDI: It would be interesting to be a dog, and learn what time smells like.

What is your most treasured possession?

What do you regard as the lowest depth of misery?

KATI: Being locked in a room full of spiders. But gallstone attacks are up there, too.

HEIDI: Watching someone I love suffer and not being able to do anything about it.

What do you most value in your friends?

HEIDI: A sense of fun and adventure.

Who are your favorite writers?

KATI: So many to choose from! Besides all my writer friends, I will say J.K. Rowling, Madeleine L’Engle, Laurel K. Hamilton, and Tamora Pierce.

HEIDI: I am going with all of Kati’s choices, plus Terry Pratchett, Tanith Lee, and Neil Gaiman.

Who is your hero of fiction?

KATI: Dr. Who (played by David Tennant) and my book hero would be Numair. Wait, those might just be my fiction crushes…

Which historical figure do you most identify with?

KATI: I’m going with Madeleine L’Engle. I love her quote about how if the book you want to write is too difficult for grown-ups, then you write it for children. It really resonates with me.

HEIDI: If we can go with authors, then I’m choosing Terry Pratchett. He loved writing so much that his reward for finishing a book was getting to write another book. Currently, my reward is ice cream and then a nap, but I’m trying to be more like him.

What is your motto?

HEIDI LANG and KATI BARTKOWSKI are a sisterly writing team with twenty years of experience in Judo. Heidi likes to fling food across her stove while attempting to cook new dishes, and Kati enjoys trying new cuisine at fancy restaurants. Between the two of them, they love creating characters that kick butt both inside and outside the kitchen. Find Heidi and Kati on their website and on Twitter: @HiDLang (Heidi) and @ktBartkowski (Kati).