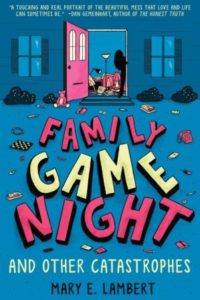 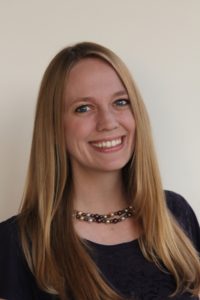 The Proust Questionnaire, popularized by the French essayist and novelist Marcel Proust, is said to reveal a person’s true nature through a series of probing (i.e., nosy) questions. In the hot seat today, Mary E. Lambert, author of the MG contemporary, FAMILY GAME NIGHT AND OTHER CATASTROPHES (Scholastic, February 28, 2017).

What is your idea of perfect happiness? Friends, family, food, and faith. Also, good books—the kind that pull a reader into the story and make her forget where she is.

What is your greatest fear? Once when I was swimming in my parents’ pool, a cockroach got stuck in my hair. I didn’t know until it happened, but as it turns out cockroaches—specifically ones tangled in my hair—are my greatest fear.

What is the trait you most deplore in yourself? Procrastination.

What is the trait you most deplore in others? Giving up easily.

Which living person do you most admire? I’m going to cheat and pick two. I really admire my grandparents. Grandpa Cal and Grandma Jo are in their eighties, and they have retained both a sense of humor and a sense of adventure. They are generous, hard-working, and committed—they are truly two of the best people I know.

What is your greatest extravagance? Probably all the iced coffees I splurge on whenever I have a serious writing project or when I need a pick-me-up in the middle of the school day.

What is your current state of mind? Tired. Possibly even overtired.

What do you consider the most overrated virtue? Vegetables. I don’t like vegetables, and now that I’m a grownup, I don’t have to eat them if I don’t want to. I’m not saying that I never eat vegetables, but now that I’m old and stuff, I only eat broccoli if it’s drowning in cheese sauce and breadcrumbs.

On what occasion do you lie? I never lie. Or I could be lying to you now. I’ll let you decide.

Which words or phrases do you most overuse? One of my students told me that I start class every day by saying, “All right!” Since he pointed it out, I’ve realized it’s true, and it drives me nuts. But it’s such a deeply ingrained habit that I can’t seem to start class any other way. When I’m writing, I overuse the words “just,” “suddenly,” and “turn.” All of my characters are always turning around. I don’t know how they’re not all constantly dizzy. I also start at least half of my sentences with “Well…” I end up deleting it from every first draft about a thousand times.

Besides writing, which talent would you most like to have? I think I’d choose dancing. I can never decide if I’d rather be an extremely gifted ballerina or an amazing ballroom dancer. But since I will never be either, I suppose I’ll just keep plugging away at this writing thing.

What do you consider your greatest achievement? In my third semester of graduate school, I was teaching fulltime and somehow wrote a critical thesis and the first draft of Family Game Night and Other Catastrophes in that one term. I’m still not sure how it happened.

If you were to die and come back as a person or a thing, what would it be? Can I come back as a rainbow? I think rainbows are hopeful things, and they don’t have to set alarm clocks or worry about traffic.

What is your most treasured possession? The necklace my dad gave me when I was four years old.

What do you regard as the lowest depth of misery? Writing a synopsis. It’s almost as bad as untangling a live cockroach from your hair.

What do you most value in your friends? Kindness.

Who are your favorite writers? Well, I fell in love with reading—and with writing— because of Beverly Cleary, Roald Dahl, and LM Montgomery. (See? I told you I overuse the word “well.”)

Who is your hero of fiction? Eugenides from Megan Whalen Turner’s brilliant fantasy series. The first book in the series is called The Thief, and if you haven’t read it, go buy a copy. Now!

Which historical figure do you most identify with? A personality inventory once told me that I have similar traits to Jane Austen and (in my opinion) that was pretty much the best news ever, because she is another of my favorite writers.

MARY E. LAMBERT teaches middle school English in Tempe, Arizona. She graduated from Vermont College of Fine Arts in 2014 with an M.F.A in Writing for Children and Young Adults. Find Mary at her website, and on Twitter.