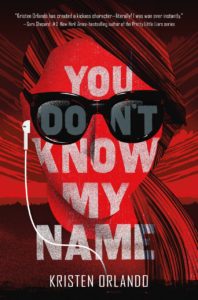 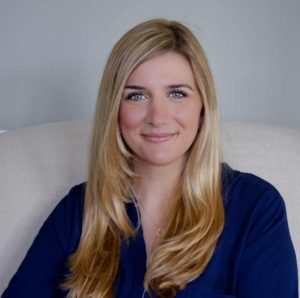 The Proust Questionnaire, popularized by the French essayist and novelist Marcel Proust, is said to reveal a person’s true nature through a series of probing (i.e., nosy) questions. In the hot seat today, Kristen Orlando, author of the YA spy thriller, YOU DON’T KNOW MY NAME (Macmillan/Swoon Reads, January 10, 2017).

What is your idea of perfect happiness? A snowy day, a fire in the fireplace, something delicious in the oven and Frank Sinatra on the stereo.

What is your greatest fear? Bees. I’m terrified and always will be. I should just get over that one. But one of my biggest fears is losing someone I love. I’d pay every single penny I have to guarantee the safety and health of my family and friends.

What is the trait you most deplore in yourself? I can be a bit of a worrier. I don’t mean to be! I think like 85 percent of the time I’m pretty laid back, but then the other 15 percent I’m running worst-case scenarios through my head.

What is the trait you most deplore in others? I hate when people are inconsiderate.

Which living person do you most admire? My parents. My mother is one of the most giving, selfless, and kind people I’ve ever met, and my father is brilliant, hilarious, and unpretentious. I admire and adore them both.

What is your greatest extravagance? I’m not a typical girl when it comes to extravagances. I’d live in sweatpants if it was socially acceptable! I’ve gotten one manicure my life, and I hate shoes (probably because my feet are narrow and I can never find a pair that fit properly). But I do enjoy traveling, and I am a bit of a hotel snob. I love a beautiful lobby, great service, comfy beds, and fluffy robes.

What is your current state of mind? Happy and excited! My book comes out TOMORROW and it’s such a dream come true. I’m filled with nothing but gratitude. (Okay, I’m a little nervous too, but 92 percent super pumped.)

What do you consider the most overrated virtue? Hmmm… I guess etiquette? I mean, behave politely! But I’ve never cared much about etiquette rules.

On what occasion do you lie? I am the worst liar. I hate lying!! I have such a guilty conscience. Lying just eats me up inside. I guess the only occasion I lie is if I don’t want to hurt someone’s feelings. I hate hurting people’s feelings more than I hate lying.

Which words or phrases do you most overuse? My husband would argue I overuse the word “love.” I’ll talk about how “I totally love” some person I probably just met. And really, I don’t love them yet. I just like them a lot. 🙂

Besides writing, which talent would you most like to have? Definitely a musical talent. I wish I could sing well or sit down at the piano and play really complicated pieces.

What do you consider your greatest achievement? Oh gosh, good question. YOU DON’T KNOW MY NAME is a great achievement and I can barely believe it’s going to be a real book. And starting my own boutique PR and marketing agency is something I’m proud of, because it took a ton of work. But I’m also really proud of the relationships I have with people. I have friendships that span decades.

If you were to die and come back as a person or a thing, what would it be? Pets sure seem like they have really great lives!

What is your most treasured possession? I have a couple: my Cabbage Patch doll, Mimi, that I got for my first birthday and carried everywhere. Also, letters and cards from important people in my life. My dad has written me a letter every single Christmas and I have saved all of them. I think that’d be the one thing I’d rescue from a fire. My husband and I have a tradition of writing each other letters for Christmas now as well. And I of course love heartfelt cards from my mom.

What do you regard as the lowest depth of misery? Loss. That pain is something that’s hard to overcome.

What do you most value in your friends? Kindness, authenticity, and a great sense of humor. All of my friends have those qualities in spades!

Who are your favorite writers? How much space do you have in this blog? Judy Blume. Gillian Flynn. John Green. Suzanne Collins. Sara Shepard. Amy Reed. Sara Zarr. E. Lockhart. Lauren Oliver. Victoria Aveyard. Meg Cabot. Alexandra Bracken. Jay Asher. Jennifer Niven. Jenny Han. There are literally one hundred more, but I assume you want to keep this brief.

Who is your hero of fiction? Katniss Everdeen. If stuff was going down, I’d want her on my team for sure.

Which historical figure do you most identify with? I guess there’s no one I can really compare myself to, but I admire so many historical figures. Particularly badass women who were incredibly fearless and helped to change social norms.

What is your motto? My dad once told me, “Never be satisfied with success, and never fear failure.” It’s definitely the “never fear failure” part I live by, especially when it comes to writing. If I had feared failure, I never would have taken the giant and scary leap to try and write my book. If you fear failure, you have no idea what you can accomplish.

Writing is one of the great loves of Kristen Orlando’s life, and she’s been lucky enough to make it her living—first as a television producer, then as a marketer and now as a novelist. Kristen graduated with a B.A. in English Literature from Kenyon College. She lives in Columbus, Ohio with her husband. Find Kristen on her website, Twitter, Facebook, Instagram,  and Goodreads.