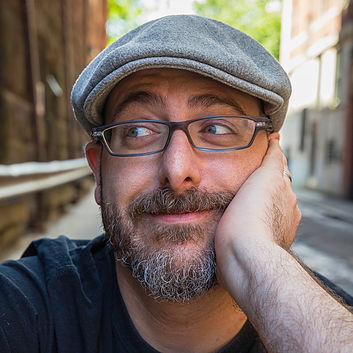 The Proust Questionnaire, popularized by the French essayist and novelist Marcel Proust, is said to reveal a person’s true nature through a series of probing (aka nosy) questions. It the hot seat today, Josh Funk, author IT’S NOT JACK AND THE BEANSTALK (Two Lions, 2017) among many others.

What is your idea of perfect happiness? Napping on a tropical island beach with an endless bowl of vegan candy corn.

What is your greatest fear? I’ll be discovered as the fraud that I am.

What is the trait you most deplore in yourself? My incessant ability to criticize (although this comes in handy when giving writers critiques).

What is the trait you most deplore in others? Loud chewing.

Which living person do you most admire? My wife.

What is your greatest extravagance? My ever-growing book collection.

What is your current state of mind? Singing.

What do you consider the most overrated virtue? Pants.

On what occasion do you lie? Ask the Author interviews. (Or do I?)

Which words or phrases do you most overuse? Personally. I personally think I should never preface a phrase with the word ‘personally.’ It’s just a waste of words.

Besides writing, which talent would you most like to have? Streetfighting.

What do you consider your greatest achievement? My kids being kind people.

If you were to die and come back as a person or a thing, what would it be? A giant boulder. Sylvester and the Magic Pebble seriously scarred me as a child.

What is your most treasured possession? My mind.

What do you regard as the lowest depth of misery? Anxiety over never being loved again.

What do you most value in your friends? Their ability to deal with the fact that I am constantly sharing my opinions with little to no filter.

Who is your hero of fiction? Scott Pilgrim.

Which historical figure do you most identify with? James K. Polk.

What is your motto? “What would Ame Dyckman do?”

JOSH FUNK writes silly stories and somehow tricks people into publishing them as books – such as the Lady Pancake & Sir French Toast series (including The Case of the Stinky Stench and the upcoming Mission: Defrostable), ​It’s Not Jack and the Beanstalk, Dear Dragon, Pirasaurs!, and the forthcoming Albie Newton, How to Code a Sandcastle (in conjunction with Girls Who Code), Lost in the Library: A Story of Patience and Fortitude (in conjunction with the New York Public Library), It’s Not Hansel and Gretel, and more coming soon! Josh is a board member of The Writers’ Loft in Sherborn, MA and was the co-coordinator of the 2016 and 2017 New England Regional SCBWI Conferences. Josh grew up in New England and studied Computer Science in school. Today, he still lives in New England and when not writing Java code or Python scripts, he drinks Java coffee and writes manuscripts. Visit Josh at his website, and follow him on Twitter, Instagram, Facebook, and Goodreads.