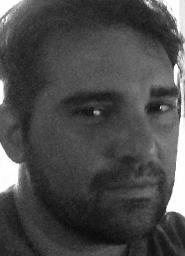 The Proust Questionnaire — popularized by the French essayist and novelist, Marcel Proust — is said to reveal a person’s true nature through a series of probing (i.e., nosy) questions. In the hot seat today: Jonathan Rosen, author of the MG fantasy novel, NIGHT OF THE LIVING CUDDLE BUNNIES (Sky Pony Press, August 2017).

What is your idea of perfect happiness? I’m not sure anything makes me perfectly happy, since I feel like my mind is always restless, but I do love doing things with my family during the day and then getting to write at night. Now that my kids are getting older, it’s hitting me more and more that their interest in wanting do things with me is limited.

What is your greatest fear? Answering questionnaires. Besides that, it’s not making it as a writer. It took years of working at it to finally get published, and I still have a hard time believing it. Now, of course, it’ll be worrying about a second book. So, to recap, it’s the fear of not making it and questionnaires.

What is the trait you most deplore in yourself? Are you insinuating that I have bad traits? Well, I don’t! Not one! Well, besides procrastination. I tend to take a while to get started. But, that’s it, so I don’t know who you’ve been talking to, because it’s all lies!

What is the trait you most deplore in others? Meanness and bullying. I hate when people are mean. Amazingly, I have seen it done by some big-time people and it boggles my mind. Like they count more because they’re famous. I make promises to myself that if I ever get lucky enough to make it to that level, I won’t ever treat people poorly.

Which living person do you most admire? When I was a kid I admired baseball players, but there really is no one person who I admire more than anyone else now. I’ve learned that people are human and I’ve been disappointed in learning the real traits of some people. However, since I am a writer and this is a blog about writing, I’ll say that I admire the people who don’t give up on their dreams. I guess that doesn’t apply to only writers; it applies to anyone who refuses to give up on their dreams and keeps going at it.

What is your greatest extravagance? Books. I buy so many. Too many, if there’s such a thing. I do eventually read most of them, but there are some I’ve never gotten to. Hopefully, I will one day.

What is your current state of mind? Hopeful. Anxious and hopeful. I think they go together.

What do you consider the most overrated virtue? Honesty. I’ve seen people say the worst things to each other and then follow it up with, “I’m just being honest.” I don’t ever think it’s okay to hurt someone.

On what occasion do you lie? On Proust Questionnaires.

Which words or phrases do you most overuse? “Awesome.” I’m sure there are others, but I’m not fully aware of them. After this, though, I’m guessing people will make sure to tell me!

Besides writing, which talent would you most like to have? For a brief time, I was a theater major, so I was into acting and got a rush out of it. I wouldn’t mind doing that again, but to me, writing is an extension of that. But, for a different talent, I wish I could sing. I can’t. My mom tells me I have the voice of an angel, though. 🙂

What do you consider your greatest achievement? Okay, I’ll give the obligatory answer of “my children” first. But honestly, they are. I have three really good kids who I’m proud of. My second thing, I guess would be not giving up. It really is so easy to give up in the writing business, especially after rejections, but I’m glad I didn’t and stuck to it.

If you were to die and come back as a person or a thing, what would it be? Besides Melissa Roske? There’s not one particular person. But, I would come back as a professional baseball player. Would love to know what that feels like, to play in front of thousands of people in a game I love.

What do you regard as the lowest depth of misery? Helplessness. When you are helpless to stop something. Seeing people do things or certain events happening in the world and you’re powerless. It’s like one big car accident. I’ve been in that type of accident and it was like it was happening in slow motion. Another car careening toward you and you know that no matter what you do, it’s going to happen. I equate that feeling of helplessness to that, but on a bigger scale. I get it when something is going on with my children, and I got it last year when my dad passed away. That feeling that you can’t do a thing about it and it’s horrible.

What do you most value in your friends? A sense of humor. Seriously, if someone can’t joke or find the funny in things, we will not make good friends. I like to joke and I don’t like to take life overly serious. So, if you can’t find humor in life, then I couldn’t be around you long term.

Who are your favorite writers? Again, besides Melissa Roske? Then, I’ll ask writers today or of all-time? For today, I do enjoy J.K. Rowling’s books, but I’m pretty sure she doesn’t need the plugs, so as for others, I like Jeff Kinney’s Wimpy Kid series. Love the humor in that and find it similar to my own. For all time, I love Mark Twain and Douglas Adams. When I first read Hitchhiker’s Guide to the Galaxy, I thought: WOW! This book is so funny, and a lot of it subtle.

Who is your hero of fiction? I like Tom Sawyer because he was funny and scheming, but not nasty. He was always thinking and clearly two steps ahead of everyone else.

Which historical figure do you most identify with? I’m also going to go with Mark Twain here. Twain seemed to have this sense of right or wrong and understanding of human nature and of the world. Maybe, it’s only today’s depiction of him, but from everything I’ve read, he seemed like a remarkable person.

What is your motto? “Don’t give up.” Seriously, you can’t. If you want something, you have to keep plugging away at it even though it may seem hopeless. Those who give up will never get anywhere.

JONATHAN ROSEN lives with his family in sunny, South Florida. He is a teacher and freelance writer who spends his “free” time being a volunteer coach for his daughter’s softball team as well as a chauffeur for all of his kids. Even though Jonathan was born in New York, he is also of Mexican descent, though neither place has been really willing to accept responsibility. A member of The Swanky Seventeens, you can find Jonathan on  Facebook, Twitter and Goodreads. He is also a contributor to Tuesday Writers and From the Mixed-Up Files.