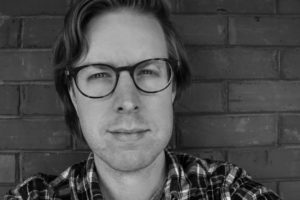 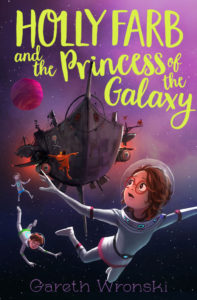 Look who’s in the Q&A spotlight! It’s none other than  Gareth Wronski, author of the MG fantasy debut, HOLLY FARB AND THE PRINCESS OF THE GALAXY (Aladdin/S&S). In stores now!

What is your idea of perfect happiness? I’m not sure it exists.

What is your greatest fear? Disappointing people.

What is the trait you most deplore in yourself? Avoiding things I know I should do.

Which living person do you most admire? My mom, for several reasons, one of which admittedly is that she will probably read this.

What is your greatest extravagance? I started working in coffee shops recently and it’s becoming a pretty obscene habit. I also have like five pairs of shoes, an enormous scandal.

What is your current state of mind? At peace, panicking.

What do you consider the most overrated virtue? The idea that a politician is the best candidate because they’re someone you’d want to have a beer with.

On what occasion do you lie? When someone asks me lots of questions about myself. [six shifty-eye emojis]

Which words or phrases do you most overuse? Like, really, sort of, kind of, probably, super, stared, frowned, and whatever this “:o” face means.

Besides writing, which talent would you most like to have? Playing a musical instrument. At various times in my life I tried to learn one but could never stick with it. Sometimes I think about giving it another go, but I usually get intimated by the commitment level. I bought a trumpet and it turns out trumpets are actually really hard to play. Who saw that coming?

What do you consider your greatest achievement? I don’t really think about myself in those terms, but if I had to answer I guess I’d say… Winning a race against that penguin in Super Mario 64, and also getting a book published.

If you were to die and come back as a person or a thing, what would it be? One of those inflatable guys that flail around outside car dealerships.

What is your most treasured possession? I can’t really think of anything… I have a stuffed Eeyore on my desk here that’s pretty good. Can I say that? I’ll say that.

What do you regard as the lowest depth of misery? Being trapped inside a prison you created and have grown to enjoy so much you aren’t even aware it’s a prison anymore.

What do you most value in your friends? Open-mindedness, sense of humor, and liking my tweets.

Who are your favorite writers? J.K. Rowling and David Foster Wallace.

Who is your hero of fiction? Hermione Granger. I like nerds with big hearts who don’t take crap from spoiled blonde kids.

Which historical figure do you most identify with? This is bad for someone who was briefly a history major, but I can’t think of any.

What is your motto? If I wanted to be 100 percent cheesy, I would quote a certain line from Spider-Man, but instead I’m going to be 99 percent cheesy and quote a line from Indiana Jones: “You lost today, kid. But that doesn’t mean you have to like it.”

GARETH WRONSKI was born and raised in Toronto. After watching Star Wars as a child on his grandparents’ VCR, he decided he wanted to tell science fiction and fantasy stories of his own. He currently resides in an old house by the Avon River in Stratford, Ontario, where he lives in constant terror of roaming swans. Find Gareth on his website, Twitter, Instagram, and Goodreads.