The Proust Questionnaire, popularized by the French essayist and novelist Marcel Proust, is said to reveal a person’s true nature through a series of probing, soul-searching questions. In the hot seat today: David Neilsen, middle-grade author of DR. FELL AND THE PLAYGROUND OF DOOM (2016) and BEYOND THE DOORS (2017).

What is your idea of perfect happiness? I’m not entirely certain, but it would probably include sun, sand, contentment, peace, and love. Maybe a couple of old arcade games from the Eighties. And cheese, gotta have cheese.

What is your greatest fear? Aside from spiders and needles, and being forced to watch one of those reality medical shows where they film people getting operated on, my greatest fear would be for my work to be lost and forgotten; never to be read or enjoyed by anyone ever again. Did I mention spiders?

What is the trait you most deplore in yourself? I can be quite self-centered when push comes to shove. It is not something I am proud of, and is something I must always be on the guard against. Now, let me continue to answer more questions about myself…

What is the trait you most deplore in others? Lack of empathy. I do not understand people who can do things that are detrimental to others without a care in the world. Like when my neighbors take up two parking spaces on the street with one car. What are they thinking? We can fit more cars there, people, if we’d just work together!

Which living person do you most admire? Former President Barack Obama. More inspiring than his intelligence and compassion is his history. His success did not come from the family he was born into, but rather from his own hard work and ingenuity and against unimaginable odds.

What is your greatest extravagance? Strategy board games.

What is your current state of mind? Tempered enthusiasm.

What do you consider the most overrated virtue? The ability to gargle in tune.

On what occasion do you lie? Only when filling out Proust Questionnaires. As far as you know. <Oh, I know, David. I know. 🙂 — MR>

Which words or phrases do you most overuse? Grisley. Horrible. Terrifying. Fetid.

Besides writing, which talent would you most like to have? I would love to have the ability to be at ease amongst strangers in social gatherings. Also invisibility.

What do you consider your greatest achievement? Personal: Getting married, having a family, and raising children without crumbling into a pile of quivering goo from all the pressure. Professional: Getting my first book published.

If you were to die and come back as a person or a thing, what would it be? Probably a zombie. I mean I’d be dead, right?

What is your most treasured possession? I have a stuffed walrus I got when I was five. I named him Wally (I was five). His tusks are in bad shape from being constantly sucked on between ages five and eight or nine, and he currently wears a hat because I accidentally burned a hole in his head in college. But he’s right there on my desk even today.

What do you regard as the lowest depth of misery? You do not want to go there with me. Trust me.

What do you most value in your friends? A keen sense of humor. That, and the ability to not dislike me for large periods of time.

Who are your favorite writers? This is difficult to answer. Whichever author I start to put down, thinking: “Oh, I love these books,” I then remember other books of theirs that I don’t love. For example, I love David Eddings’ Belgariad series, but am not so hot on most of his other series (which tend to be poor rehashings of the Belgariad series). I love Jonathan Stroud’s Lockwood & Co. series, but couldn’t get through his Bartimaeus trilogy. I adore Kevin Sands’ Blackthorn Key books, except the most recent one left a lot to be desired. I love most, but not all, of Roald Dahl’s work. You get the idea.

Which historical figure do you most identify with? Probably some sort of foppish French or English court dandy from the 1700s.

What is your motto? “Smile, there’s probably a hidden camera somewhere nearby filming you.”

DAVID NEILSEN is the author of two MG horror/comic/fantasies published by Crown Books for Young Readers: Dr. Fell and the Playground of Doom (2016) and Beyond the Doors (2017). A classically trained actor, David works as a professional storyteller based in Sleepy Hollow, New York, and spends much of October spooking the bejeebers out of people or performing one of his one-man shows inspired by the works of H. P. Lovecraft. He lives with his wife, son, daughter, and two very domineering cats. Find David via his website, Facebook, Twitter, and Instagram. 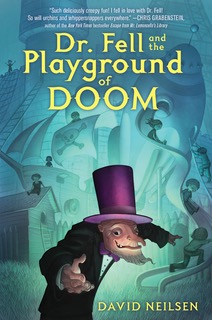