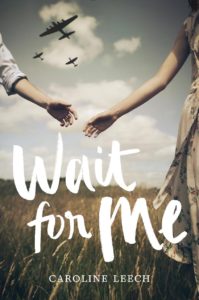 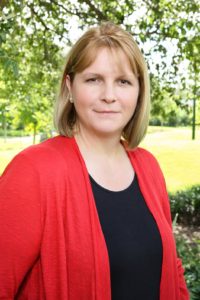 The Proust Questionnaire— popularized by the French essayist and novelist, Marcel Proust — is said to reveal a person’s true nature through a series of probing (i.e., nosy) questions. In the hot seat today: Caroline Leech, author of the YA historical novel, WAIT FOR ME (HarperTeen, January 31, 2017).

What is your idea of perfect happiness? Having our house full of friends, eating and drinking and talking, all ending up with a big ball game in the yard.

What is the trait you most deplore in yourself? Distraction. I am so easily distracted from what I’m supposed to be doing, it drives my family to… well, to distraction! But since it almost always feels as if the inside of my mind is a ten-lane highway, each a different thought track, is it any wonder I sometimes change lanes without warning? Sometimes, though, it would be nice if my brain were to be a single-track road, winding through beautiful and peaceful countryside!

What is your greatest fear? Losing people I love.

What is the trait you most deplore in others? Lack of thought for others, or what my dad would call the “I’m all right, Jack!” syndrome. It’s those people who, as long as they are in the place they want to be, don’t care what hurt or trouble they cause others.

Which living person do you most admire? As a writer, I would say J.K. Rowling. She grasped hold of a sliver of idea and ran with it, even though her life was in all sorts of trouble. Because of her belief in herself and in Harry, she produced one of the greatest book series (THE greatest?) ever. But still, she remains first and foremost a wife and a mom, and lives a (relatively) normal family life in my home city – Edinburgh, Scotland. There, she’s fondly referred to as Mrs. Murray, her married name, and has cleverly managed to avoid all the meanness and dramas which so often seem to come with huge wealth and fame. As a writer, a mother and a woman, I admire her so much.

What is your greatest extravagance? Sugar! Scottish people are well known for their sweet tooth, and I am a true Scot in that regard. Oh, and books, of course. I have way too many, if such a thing is possible!

What is your current state of mind? Rather frantic! Trying to write the first draft of Book 2 while working towards the publication of Book 1 is quite challenging.

What do you consider the most overrated virtue? Glancing around the state of my house right now (actually, most of the time), I suppose tidiness and inner tranquility are the two I achieve least successfully!

On what occasion do you lie? To protect someone’s feelings, but that can be a short-term fix. Ignoring a long-term problem can be more damaging, and the truth might ultimately be better to hear.

Which words or phrases do you most overuse? Literally, swanky, awesome, and a number of others I really shouldn’t use in polite company! Oh, and I seriously overuse exclamation points too, as you might have noticed!!

Besides writing, which talent would you most like to have? I love to sing, and I wish I had more than my basic musical knowledge so I could play the piano and guitar well too.

What do you consider your greatest achievement? I have three amazing kids, although I’m not sure I can really claim much credit for them being who they are, can I?

If you were to die and come back as a person or a thing, what would it be? If it meant I would be able to get more sleep than I do at the moment, I think a feather bed would be a very relaxing thing to be! Or a sloth, if it had to be a living thing.

What is your most treasured possession? I’m a bit of a hoarder, so I don’t have one treasured possession–I have a whole houseful.I love finding something that takes me back to a certain time or place, even it if is a bus ticket or a theater playbill from years before, which my husband would have thrown out if I hadn’t hidden it first!

What do you regard as the lowest depth of misery? Seeing awful things happen out in the world and feeling utterly powerless to stop then.

What do you most value in your friends? Loyalty and patience.

Who are your favorite writers? Where to start? In children’s & YA books: J.K. Rowling, of course, Lois Lowry, Kate Di Camillo, Gary Paulsen, CS Lewis, Philip Pullman. I also love all sorts of adult historical fiction, especially in WWII settings, and I also have a sneaky addiction to the romances set on Nantucket by Elin Hilderbrand and Nancy Thayer!

Who is your hero of fiction? Right now, it’s any mother in a YA novel who remains liked by her teenage children throughout the story. When you have teens of your own, it can be hard to read about how easily a parent’s best intentions can be misread, ignored or disliked by a teen, even a fictional one!

Which historical figure do you most identify with? There’s a Scottish legend about King Robert the Bruce that I love. His army was being defeated on the battlefield and he ran away into a cave in despair. But as he sat there, he watched a spider spinning her web. Each time she swung across to the far wall and missed, she tried again, and again, until she reached it and could begin to weave her intricate web. Robert the Bruce heard a voice in his head saying, “If at first you don’t succeed, try, try and try again.” So he went back to the battle, and in the end, he won. It can be daunting, as a writer, to discover how many times you have to swing and miss before you finally reach the other side. But of course, once you get there, the work is only just beginning!

What is your motto? Something I tell my kids is that you cannot be true to other people if you are not true to yourself. Of course, Shakespeare put it so much better:

This above all: to thine own self be true,

And it must follow, as the night the day,

Thou canst not then be false to any man.

CAROLINE LEECH is a Scottish writer who moved to Texas for an adventure ten years ago. In addition to writing YA fiction, she blogs a lot, reads a lot, and almost always has an audiobook playing through her headphones. She lives in Houston with her husband and three teenage children. You can find Caroline on her website, Facebook, Goodreads and Twitter.